If you are a regular R Views reader, then you know that every month I post my Top 40 picks for new CRAN packages. In this post, I’ll borrow some additional terminology from the Top 40 AM radio of my youth, and talk about two new categories of CRAN packages: Golden Oldies and One Hit Wonders.

On Top 40 radio, Golden Oldies are tunes that continue to get a lot of air play over decades, and are generally thought to be classics of 50’s, 60’s, and 70’s pop culture. By a Golden Oldie R package I mean an R package that has been around for a long time, has gone through several version upgrades of bug fixes and enhancements, and is thought to be an indispensable package for some part of the R Community.

For example, the nlme and lme4 R packages for fitting mixed models would surely be on the Golden Oldie list for any biostatistician who works in R. nlme has been around since 1999 and has had 139 version bumps, while lme4 was introduced in 2003 and has had 118 versions so far. The download statistics indicate that lme4 has largely replaced nlme but nlme is still getting some serious play time. 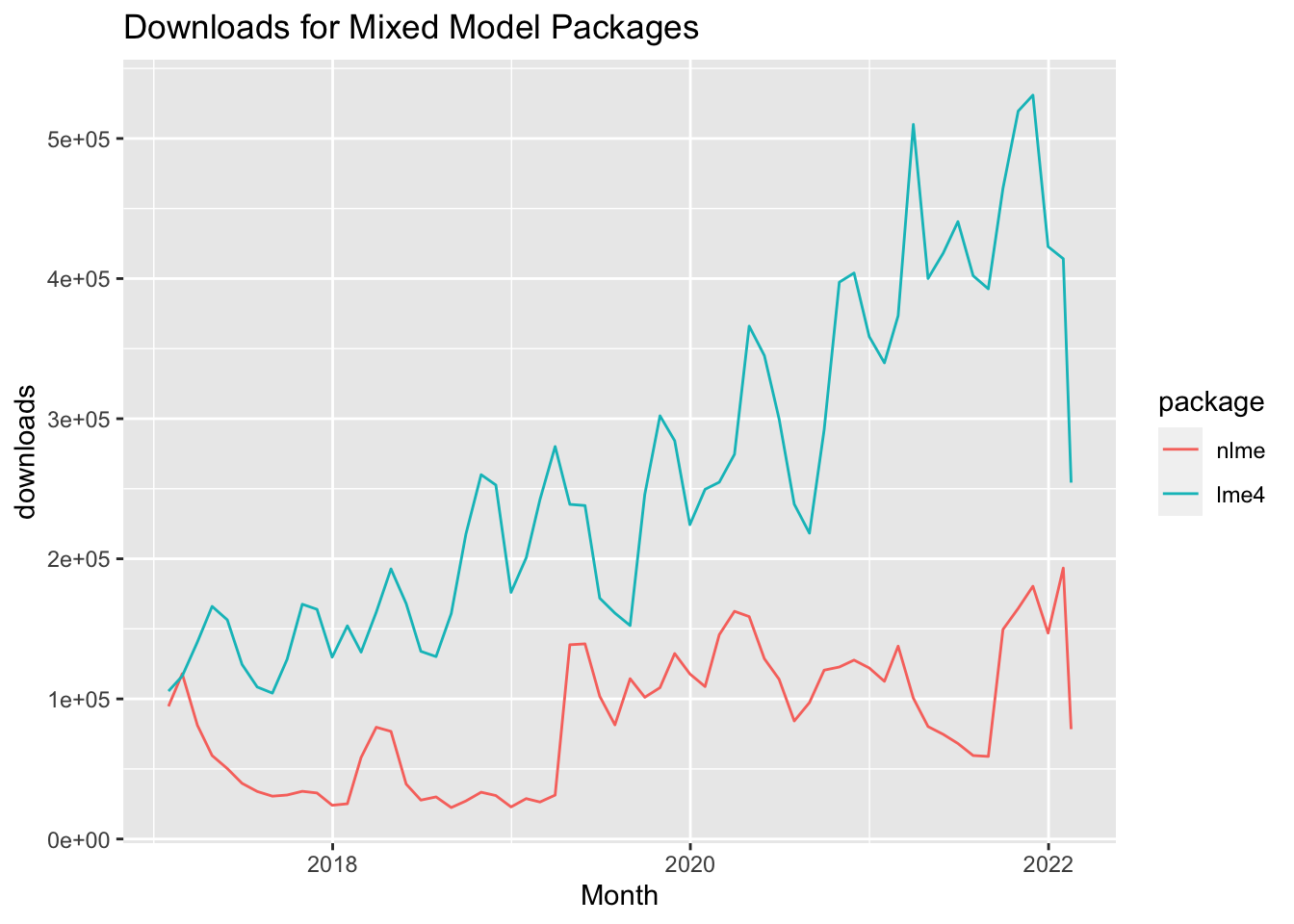 In addition to signalling usefulness, Golden Oldieness also serves as a proxy for quality. I believe that most R users would agree that packages which have been lovingly maintained over many years and still see frequent use are most likely to contain code that you can count on. This is the kind of risk mitigation metric that is driving the R Validation Hub effort.

The following is a list of ten packages that I count as Golden Oldies. They have all been around for at least 14 years and they all get considerable play. 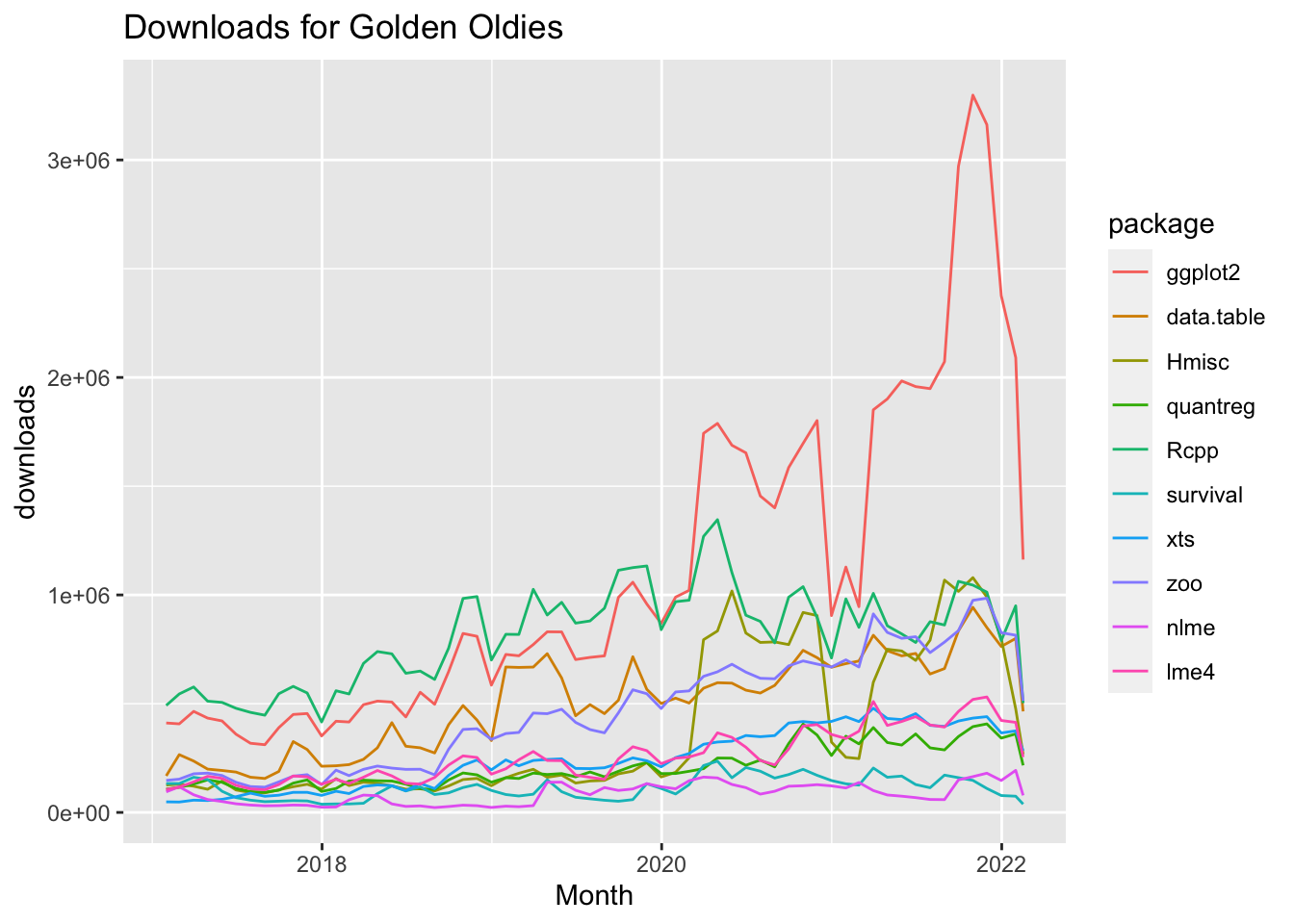 On Top 40 radio One Hit Wonders could also be Golden Oldies. The designation just meant that the recording artists had one big hit and then could not find their way back into the Top 40 again. (Here is a One Hit Wonder favorite of mine from 1969.)

For CRAN packages, I am using One Hit Wonder to mean a package that has been on CRAN for many years but has never had a version bump: no bug fixes, no upgrades, no faults - just the opposite of “Golden Oldies”. Finding them is not so easy though. As far as I can tell, there is no easy way to access the CRAN archive metadata. However, you can hunt for One Hit Wonders by searching through the long left tail of the publication date distribution of CRAN packages.

This code picks out the publication dates for CRAN packages.

And, here is the histogram. The vertical lines mark the first two quantiles. 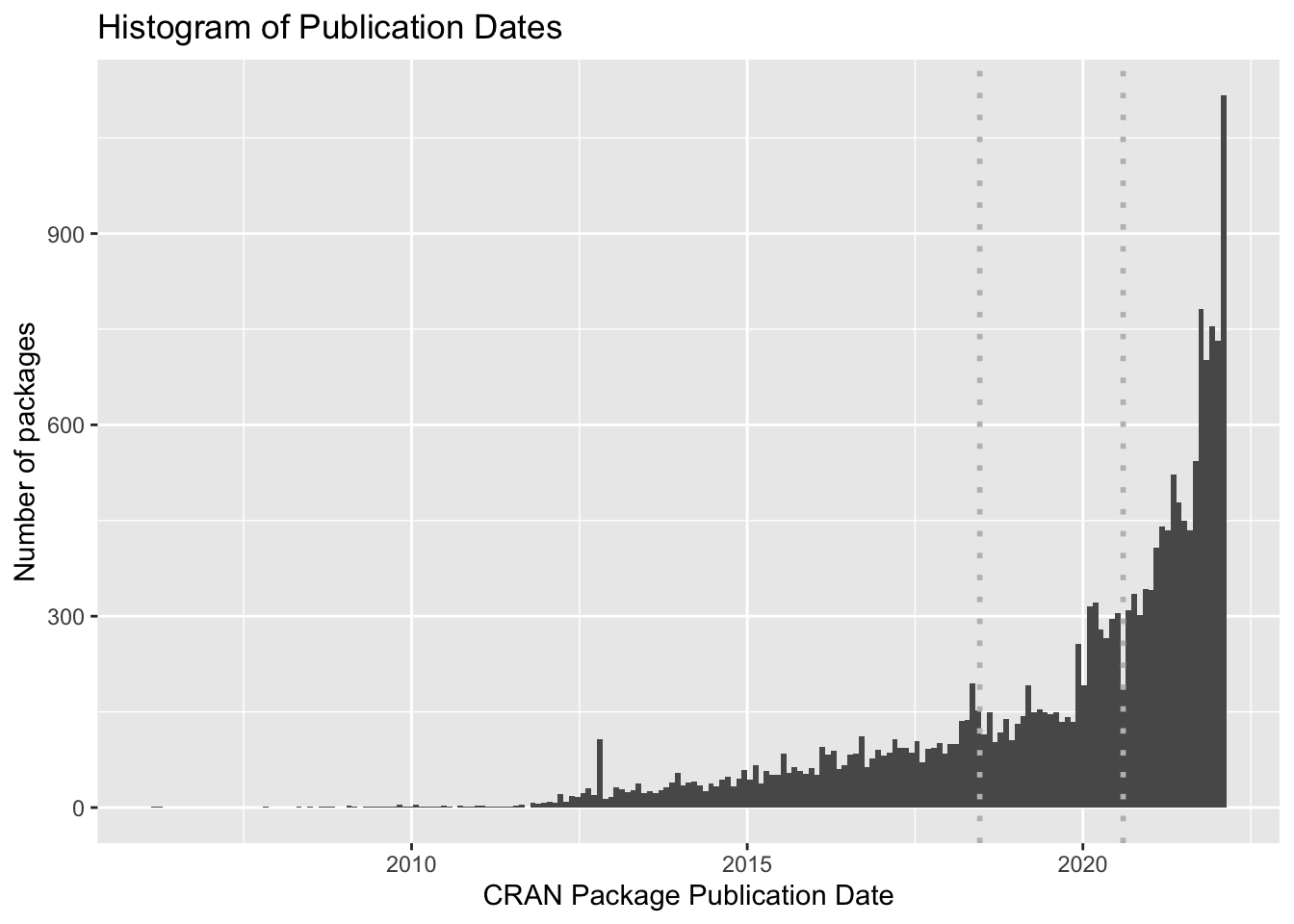 Eyeballing the package documentation on CRAN revealed that there are nine One Hit Wonders among the first twenty oldest packages in the left tail. Here are their download stats. 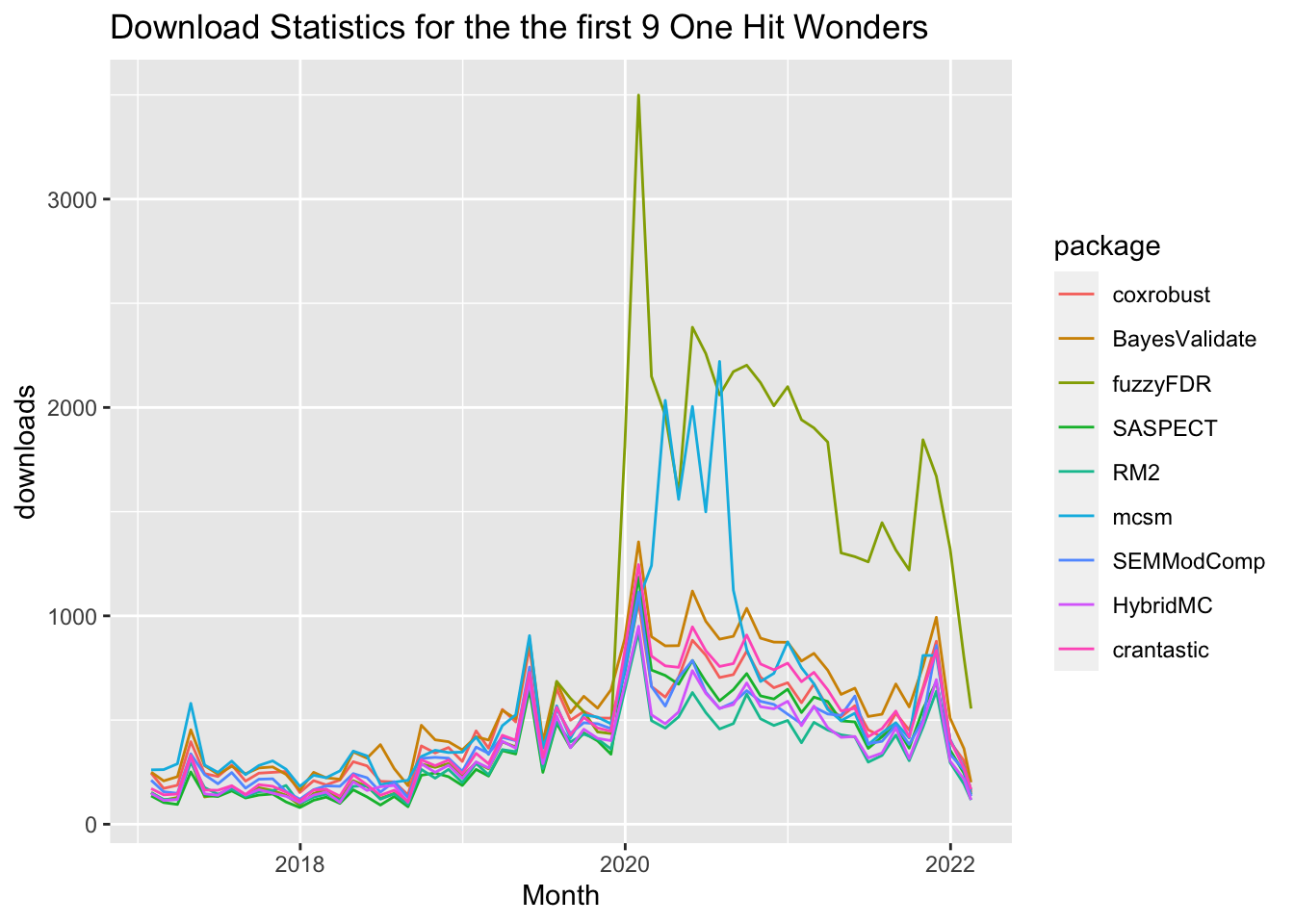 But what can you say about these One Hit Wonders? Except for fuzzyFDR, the first nine don’t seem to be getting much action. The small download numbers, however, do not themselves signal a lack quality or irrelevance. There may indeed be some treasures among One Hit Wonders that survive on CRAN because unlike the music business, as long as a package plays and does not break any other package, the CRAN D.J.s keep it in the playlist.

So, are you the kind of person who enjoys sorting through old records: 33s, 45s, and maybe even 78s. Would you visit a shop like Rough Trade, the AI Record Shop or Stranded Records on a trip to New York City? If so, maybe you would enjoy looking through CRAN for esoteric packages like BayesValidate which supports an interesting paper on validating Bayesian models. Wouldn’t it be special to find a One Hit Wonder out there on CRAN in mint condition, needing no bug fixes or enhancements, that does something really sweet?