Last week, I had the opportunity to talk to a group of Master’s level Statistics and Business Analytics students at Cal State East Bay about R and Data Science. Many in my audience were adult students coming back to school with job experience writing code in Java, Python and SAS. It was a pretty sophisticated crowd, but not surprisingly, their R skills were stitched together in a way that left some big gaps. Many for example, didn’t fully understand the importance of CRAN Task Views as curated source for the best packages to support their work in machine learning, time series and the other areas of Statistics they were studying. So, it made sense that even though ggplot2 and dplyr were mentioned in some of the student’s questions, a faculty member present asked: “What is the tidyverse?” in an attempt to cover an area that he knew was one of those gaps.

There is an incredible amount of good material available online about the tidyverse, and I will point to some of that below. But here, I’ll elaborate on the answer I gave during the Q&A.

The tidyverse is a coherent system of packages for data manipulation, exploration and visualization that share a common design philosophy. These were mostly developed by Hadley Wickham himself, but they are now being expanded by several contributors. Tidyverse packages are intended to make statisticians and data scientists more productive by guiding them through workflows that facilitate communication, and result in reproducible work products. Fundamentally, the tidyverse is about the connections between the tools that make the workflow possible.

It is also the case that the tidyverse is work in progress. You can find the current state of development at tidyverse.org. Clicking on the icon for each package on this website will bring you to detailed documentation for each package. The following figure illustrates a canonical data science workflow, and shows how the individual packages fit in. 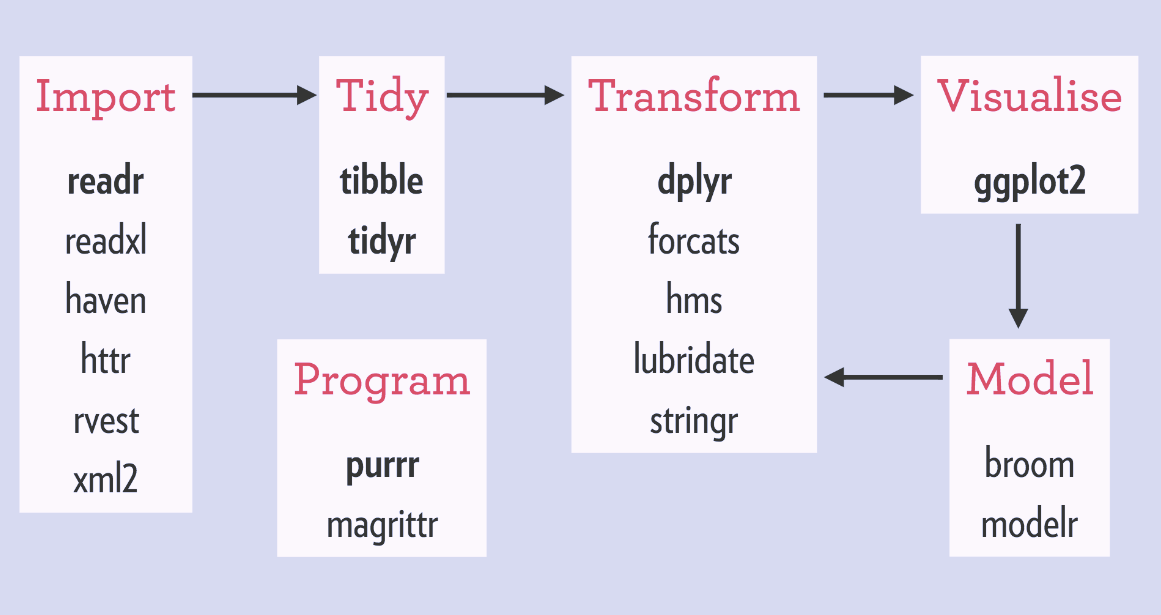 If you have some experience with R, you ought to be able to jump right into the online documentation and find your way around. If you are new to R, and maybe new to data science as well, you can’t do any better than work through the book R for Data Science by Hadley Wickham and Garrett Grolemund.

The advantages of the tidyverse include consistent functions, workflow coverage, a path to data science education, a parsimonious approach to the development of data science tools, and the possibility of greater productivity.

The tidyverse aspires to consistency on multiple levels. Examples of “micro”-level consistency include the convention of having variable names glide along in snake_case, and the signatures of tidyverse functions follow a regular pattern. (The first formal argument is always a data frame that provides the function’s input.) Higher-level consistency includes the idea of tidy data - a data frame where each row is an observation and each column contains the value of a single variable - and the way in which the pipe operator, %>%, channels the flow of tidy operations. Under the covers, there are even more levels of structure that aid the pursuit of consistency, including uniform standards for package organization, testing procedures, coding style, etc.

The workflow shown above, with tidyverse packages associated with the various steps, or more usually rendered with the following iconic tidyverse diagram, preceded and motivated the development of the tidyverse.

It is an abstraction of the canonical data analysis workflow that has always guided statisticians, but now informs data science as a map to organize, streamline, automate and optimize the various processes involved. The fact that tidyverse packages are associate with all of the processes indicates that it comprises enough fundamental building blocks to support the entire end-to-end workflow for a variety of data sources and analysis goals. Moreover, the relatively recent addition of the purrr package extends the reach of the tidyverse to support the creation of new data science tools.

A great strength of the R language is that with over ten thousand user contributed packages on CRAN alone, it has a lot to offer. This kind of organic growth makes it inevitable that packages will offer overlapping features. Users have to make decisions about which package, or suite of packages, they will make the effort to learn. For many users, the decision hinges on whether a collection of packages visibly supports important work. Does it have a large community of users and is it backed by committed developers and maintainers? All of the signals indicate that (at least, among R-using data scientists) the tidyverse has reached critical mass. For example, the tidyverse package has been downloaded 50,000 times in the last month. Moreover, it appears that tidyverse principles are propagating into other application areas. The tidyquant package, for example, is a serious attempt to bring tidy principles to Finance.

A typical R user gets involved with R in the first place through a desire to compute in some quantitative field. The path to R competency frequently begins with mastering a small number of relevant functions. Statisticians, for example, may learn to read in data from a .csv file and build a linear regression model with lm(). Financial analysts may be introduced to R through a package like quantmod, which enables a new user to do quite a bit of real work. The tidyverse provides the path of least resistance, or “pit of success”, for data scientists interested in R. For example, the small number of compatible building blocks provided by dplyr enable even a relatively inexperienced user to tidy up a messy data set quickly and easily.

The packages and functions of the tidyverse are the result of trial-and-error experimentation carried out over several years, to find a minimum set of functions that are sufficient to enable the canonical data science workflow. Those of you who have been following Hadley’s work will remember cast() and melt() from the reshape and reshape2 packages, and ddply() from the plyr package, which were early attempts to find a vocabulary for wrangling data frames. After several attempts to identify and construct the most advantages set of primitive building blocks, the tidyverse has matured into its present form.

Hadley has always been clear that a major goal for the tidyverse - and indeed much of his work over the years - has been to help anyone who needs to analyze data work productively, and he is fond of quoting Hal Abelson: “Programs must be written for people to read and only incidentally for machines to execute”. My take is that a major reason for the popularity of tidyverse packages is that they help people achieve and maintain flow in their daily data analysis work.

The tidyverse, of course, is not without limitations. Some of these are due to factors that are beyond the designer’s control, and others may be by design. Limitations of the first kind may arise from a lack of agreement as to whether some data can be, or should be, forced into a “rectangular” data structure. For example, although there are scientists and data scientists working in genomics that are fans of dplyr and ggplot2, much of the work done in the Bioconductor Project remains outside of the tidyverse workflow.

The need for the close coordination of tidyverse packages produces some limitations of the second sort. There are many high-quality R packages that are of great use to data scientists, but based on design goals that differ from those of the tidyverse. There will always be more than the tidyverse.

A powerful, but perhaps under-appreciated, capability of the R language is its ability to support the design and programming of Domain Specific Languages. Joe Cheng highlighted this feature in an interview he gave to R Views last year. He described R as being “shockingly close to LISP”, of which Joe says: “it’s almost like you change the language itself to be a DSL for whatever problem you’re trying to solve … the elegant, terse syntax of dplyr and the pipe operator are possible because of how malleable a language R is, and how great it is for writing DSLs in it.”

So, from a wider perspective, the tidyverse can be seen as sub-dialect of the R language that is evolving to express ideas and tasks inherent in Data Science workflows and software development. This dialect may not be for everyone, but it does seem to be helping many R fluent data scientists frame their conversations.

The following are some resources that you may find helpful in learning and mastering the tidyverse.