In two previous posts, Introduction to Functional Data Analysis with R and Basic FDA Descriptive Statistics with R, I began looking into FDA from a beginners perspective. In this post, I would like to continue where I left off and investigate Functional Principal Components Analysis (FPCA), the analog of ordinary Principal Components Analysis in multivariate statistics. I’ll begin with the math, and then show how to compute FPCs with R.

As I have discussed previously, although the theoretical foundations of FDA depend on some pretty advanced mathematics, it is not necessary to master this math to do basic analyses. The R functions in the various packages insulate the user from most of the underlying theory. Nevertheless, attaining a deep understanding of what the R functions are doing, or looking into any of the background references requires some level of comfort with the notation and fundamental mathematical ideas.

I will define some of the basic concepts and then provide a high level roadmap of the mathematical argument required to develop FPCA from first principals. It is my hope that if you are a total newcomer to Functional Data Analysis you will find this roadmap useful in apprehending the big picture. This synopsis closely follows the presentation by Kokoszka and Reimherr (Reference 1. below).

We are working in \(\mathscr{H}\), a separable Hilbert space of square integrable random functions where each random function, \(X(\omega,t)\), where \(\omega \in \Omega\) the underlying space of probabilistic outcomes, and \(t \in [0,1]\). (After the definitions below, I will suppress the independent variables and in most equations assume \(EX = 0\).)

The Road to Functional Principal Components

As we have seen, the fundamental idea of Functional Data Analysis is to represent a function \(X\) by a linear combination of basis elements. In the previous posts we showed how to accomplish this using a basis constructed from more or less arbitrarily selected B-spline vectors. But, is there a an empirical, some would say natural basis that can be estimated from the data? The answer is yes, and that is what FPCA is all about.

A good way to start is to look at the distance between a vector \(X\) and its projection down into the space spanned by some finite, p-dimensional basis \((u_k)\) which is expressed in the following equation,

This expands out to:

and with a little algebra this:

It should be clear that we would want to find a basis that makes \(D\) as small as possible, and that minimizing \(D\) is equivalent to maximizing the term to be subtracted in the line above.

Now that we have enough math to set the context, let’s calculate. We will use the same simulated Brownian motion data that we used in the previous posts, and also construct the same B-spline basis that we used before and save it in the fda object W.obj. I won’t repeat the code here.

The following plot shows 120 simulated curves, each having 1000 points scattered over the interval [0, 100]. Each curve has unique observation times over that interval. 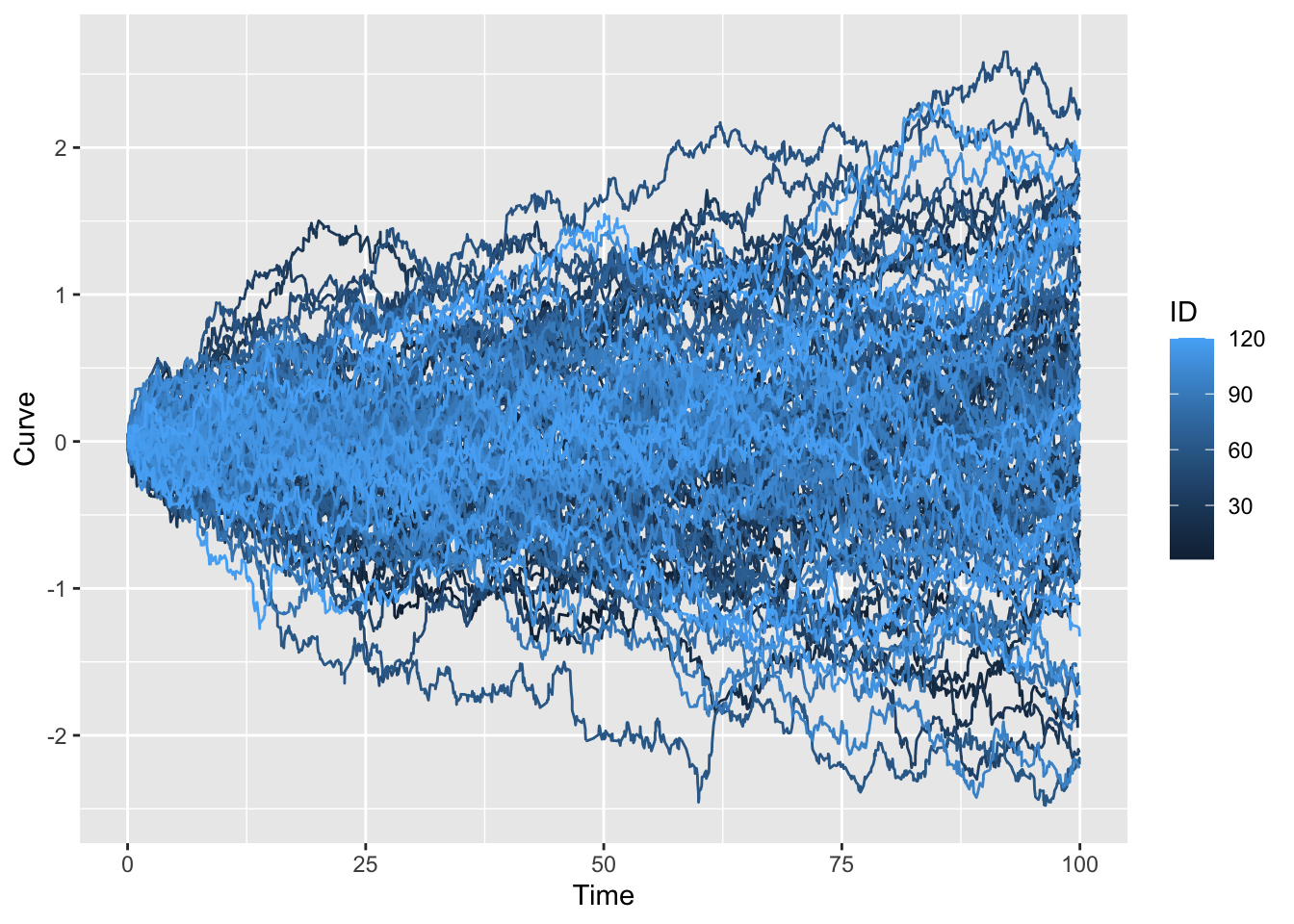 For first attempt at calculating functional principal components we’ll use the pca.fd() function from the fda package. So set up wise, we are picking up our calculations exactly where we left off in the previous post. As before, the basis representations of these curves are packed into the fda object W.obj. The function pca.fd() takes W.obj as input. It needs the non-orthogonal B-spline basis to seed its computations and the estimate the covariance matrix and the orthogonal eigenvector basis \(v_j\). The nharm = 5 parameter requests computing 5 eigenvalues.

The method of calculation roughly follows the theory outlined above. It starts with a basis representation of the functions, computes the covariance matrix, and calculates the eigenfunctions.

The object produced by pca.fd() is fairly complicated. For example, the list fun_pca$harmonics does not contain the eignevectors themselves, but rather coefficients that enable the eigenvectors to be computed from the original basis. However, because there is a special plot method for plot.pca.fd() it is easy to plot the eigenvectors. 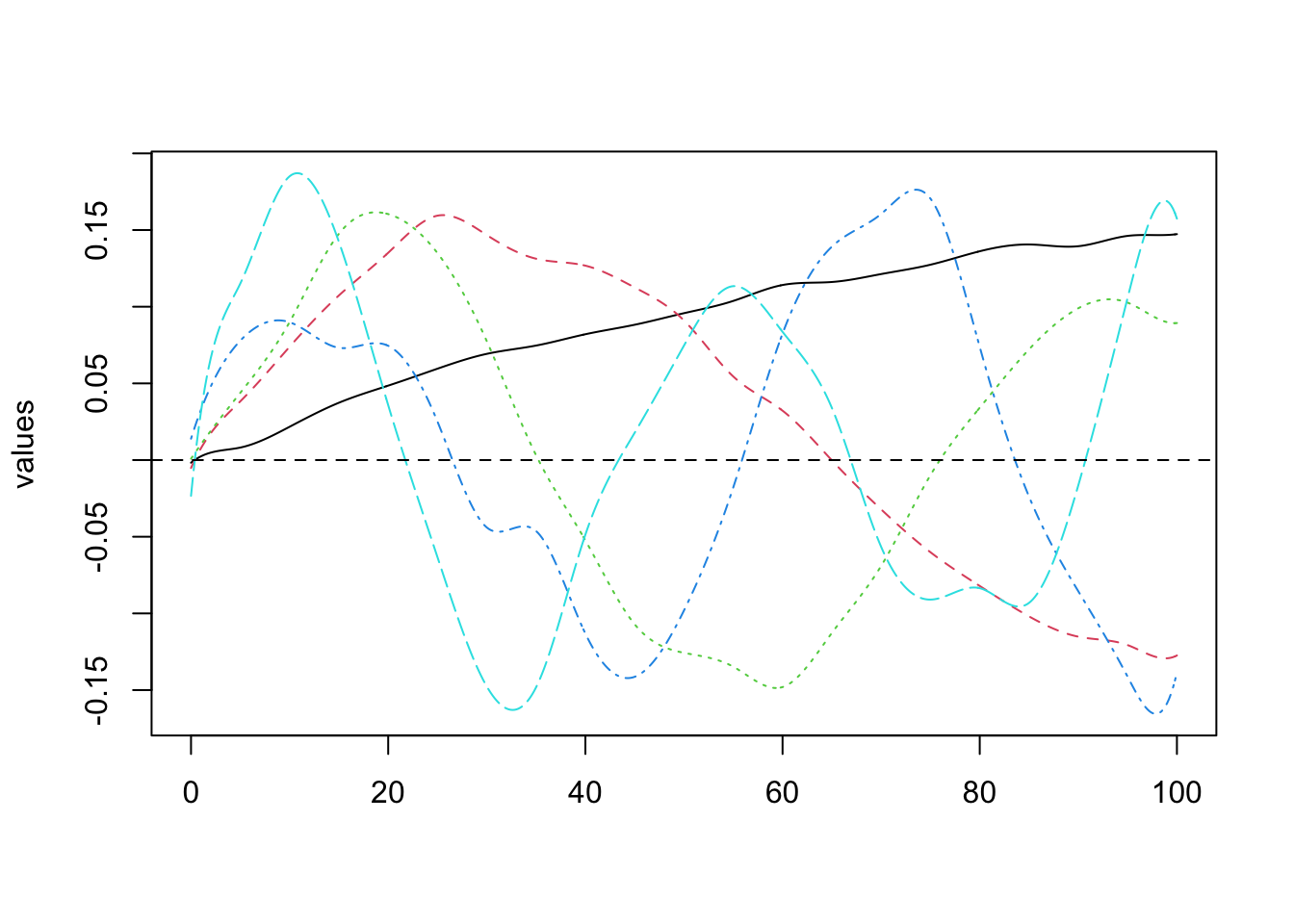 and, the proportion of the variance explained by each eigenvalue.

So far in this short series of FDA posts, I have been mostly using the fda package to calculate. In 2003 when it was released, it was ground breaking work. It is still the package that you are most likely to find when doing internet searches, and is the foundation for many subsequent R packages. However, as the CRAN Task View on Functional Data Analysis indicates, new work in FDA has resulted in several new R packages. The more recent fdapace takes a different approach to calculating principal components. The package takes its name from the (PACE) Principal Components by Conditional Expectation algorithm described in the paper by Yao, Müller and Wang (Reference 4. below). The package vignette is exemplary. It describes the methods of calculation, develops clear examples and provides a list of references to guide your reading about PACE and FDA in general.

The fdapace package requires data for the functions (curves) and associated times be organized in lists. We begin by using the fdapace::CheckData() function to check the data set up in the tibble df. (See previous post on descriptive statistics for the details on the data construction.)

No error message is generated, so we move on th having the FPCA() function calculate the FPCA outputs including:

the cumulative percentage of variance explained by the eigenvalue

All of these are in fairly good agreement with what we computed above. I am, however, a little surprised by the discrepancy in the value of the second eigenvalue. The default plot method for FPCA() produces a plot indicating the density of the data, a plot of the mean of the functions reconstructed from the eigenfunction expansion, a scree plot of the eigenvalues and a plot of the first three eigenfunctions. 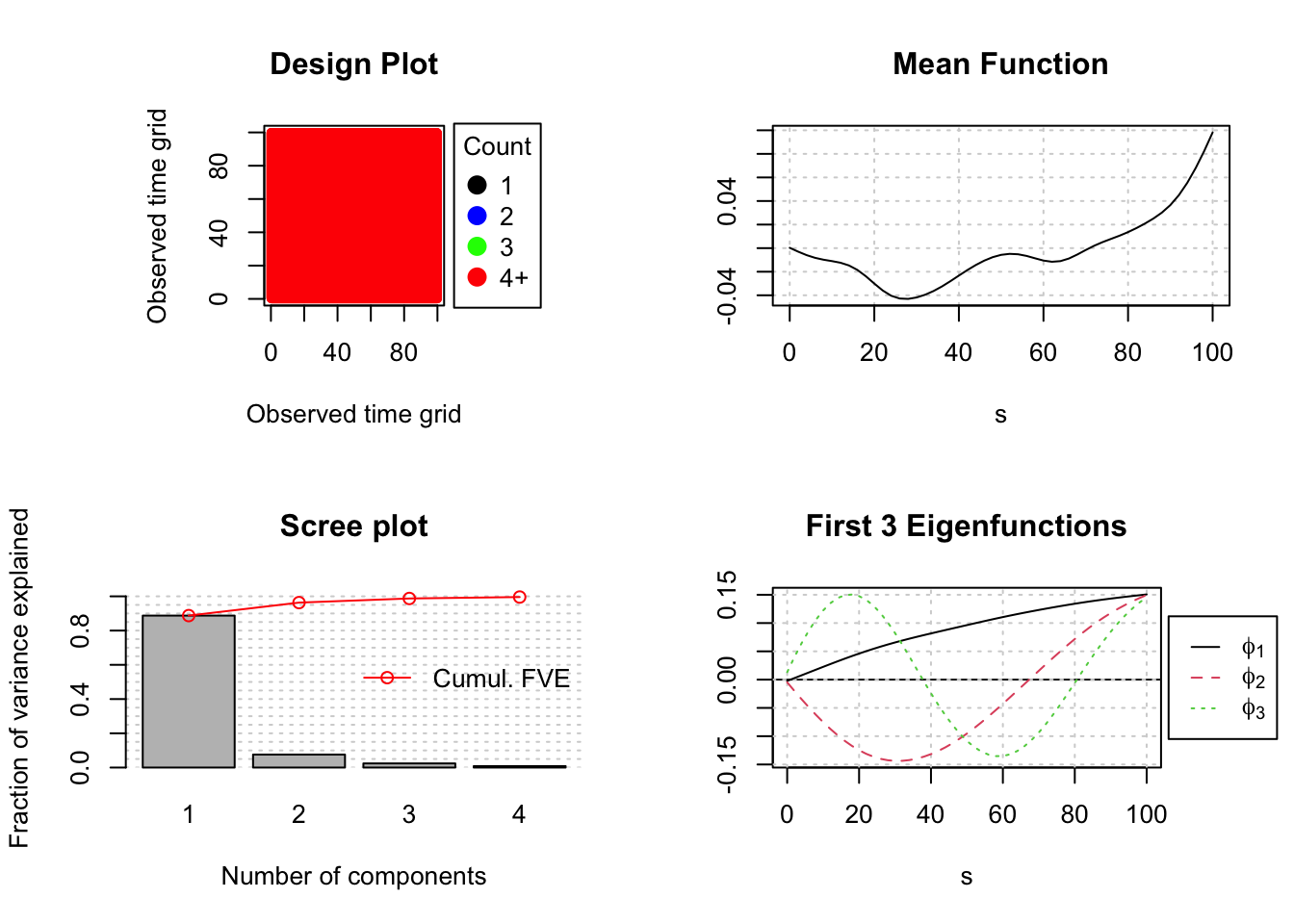 Finally, it has probably already occurred to you that if you know the eigenvalues and scores, the Karhunen–Loève expansion can be used to simulate random functions. It can be shown that for the Wiener process:

The fdapace function fdapace::Wiener() uses this information to simulate an alternative, smoothed version of the Brownian motion, Wiener process. 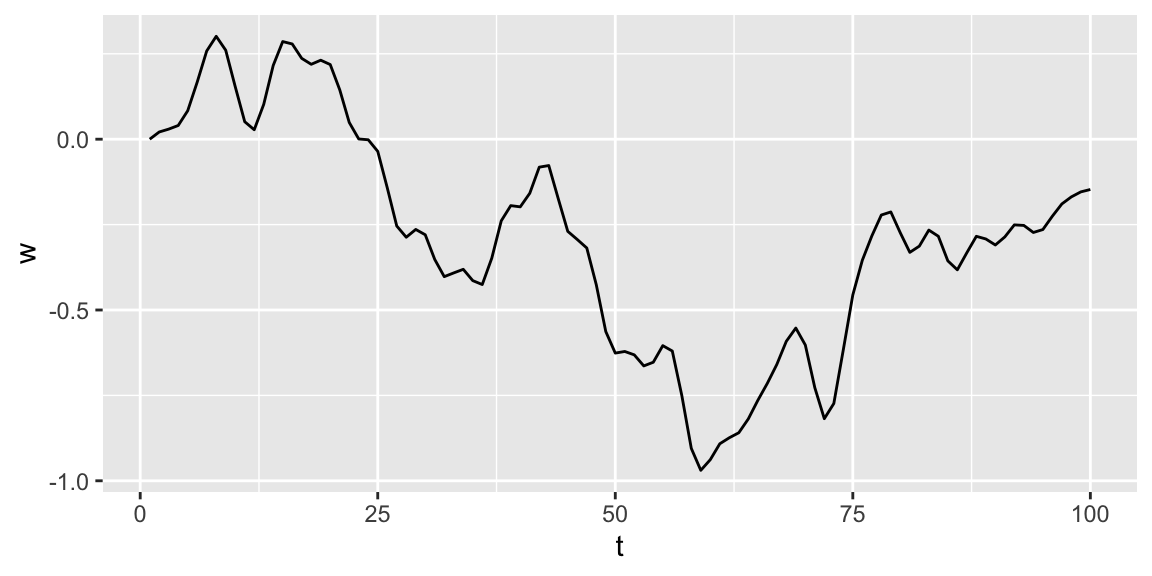 In future posts, I hope to continue exploring the fdapace package, including its ability to work with sparse data.