The Cox Proportional Hazards model has so dominated survival analysis over the past forty years that I imagine quite a few people who regularly analyze survival data might assume that the Cox model, along with the Kaplan-Meier estimator and a few standard parametric models, encompass just about everything there is to say about the subject. It would not be surprising if this were true because it is certainly the case that these tools have dominated the teaching of survival analysis. Very few introductory textbooks look beyond the Cox Model and the handful of parametric models built around Gompertz, Weibull and logistic functions. But why do Cox models work so well? What is the underlying theory? How do all the pieces of the standard survival tool kit fit together?

As it turns out, Kaplan-Meier estimators, the Cox Proportional Hazards model, Aalen-Johansen estimators, parametric models, multistate models, competing risk models, frailty models and almost every other survival analysis technique implemented in the vast array of R packages comprising the CRAN Survival Task View, are supported by an elegant mathematical theory that formulates time-to-event analyses as stochastic counting models. The theory is about thirty years old. It was initiated by Odd Aalen in his 1975 Berkeley PhD dissertation, developed over the following twenty years largely by Scandinavian statisticians and their collaborators, and set down in more or less complete form in two complementary textbooks [5 and 9] by 1993. Unfortunately, because of its dependency on measure theory, martingales, stochastic integrals and other notions from advanced mathematics, it does not appear that the counting process theory of survival analysis has filtered down in a form that is readily accessible by practitioners.

In this rest of this post, I would like to suggest a path for getting a working knowledge of this theory by introducing two very readable papers, which taken together, provide an excellent overview of the relationship of counting processes to some familiar aspects of survival analysis.

The first paper, The History of applications of martingales in survival analysis by Aalen, Andersen, Borgan, Gill, and Keiding [4] is a beautiful historical exposition of the counting process theory by master statisticians who developed a good bit of the theory themselves. Read through this paper in an hour of so and you will have an overview of the theory, see elementary explanations for some of the mathematics involved, and gain a working idea of how the major pieces of the theory fit together how they came together.

The second paper, Who needs the Cox model anyway? [7], is actually a teaching note put together by Bendix Carstensen. It is a lesson with an attitude and the R code to back it up. Carstensen demonstrates the equivalence of the Cox model to a particular Poisson regression model. Working through this note is like seeing a magic trick and then learning how it works.

The following reproduces a portion of Carstensen’s note. I provide some commentary and fill in a few elementary details in the hope that I can persuade you that it is worth the trouble to spend some time with it yourself.

Carstensen use the North Central Cancer Treatment Group lung cancer survival data set which is included in the survival package for his examples.

It may not be obvious at first because there is no subject ID column, but this data frame contains one row for each of 228 subjects. The first column is an institution code. time is the time of death or censoring. status is the censoring indicator. The remaining columns are covariates. I select time, status, sex and age, drop the others from the our working data frame, and then replicate Carstensen’s preprocessing in a tidy way. The second line of mutate() adds a small number to each event time to avoid ties.

To get a feel for the data we fit a Kaplan-Meier Curve stratified by sex. 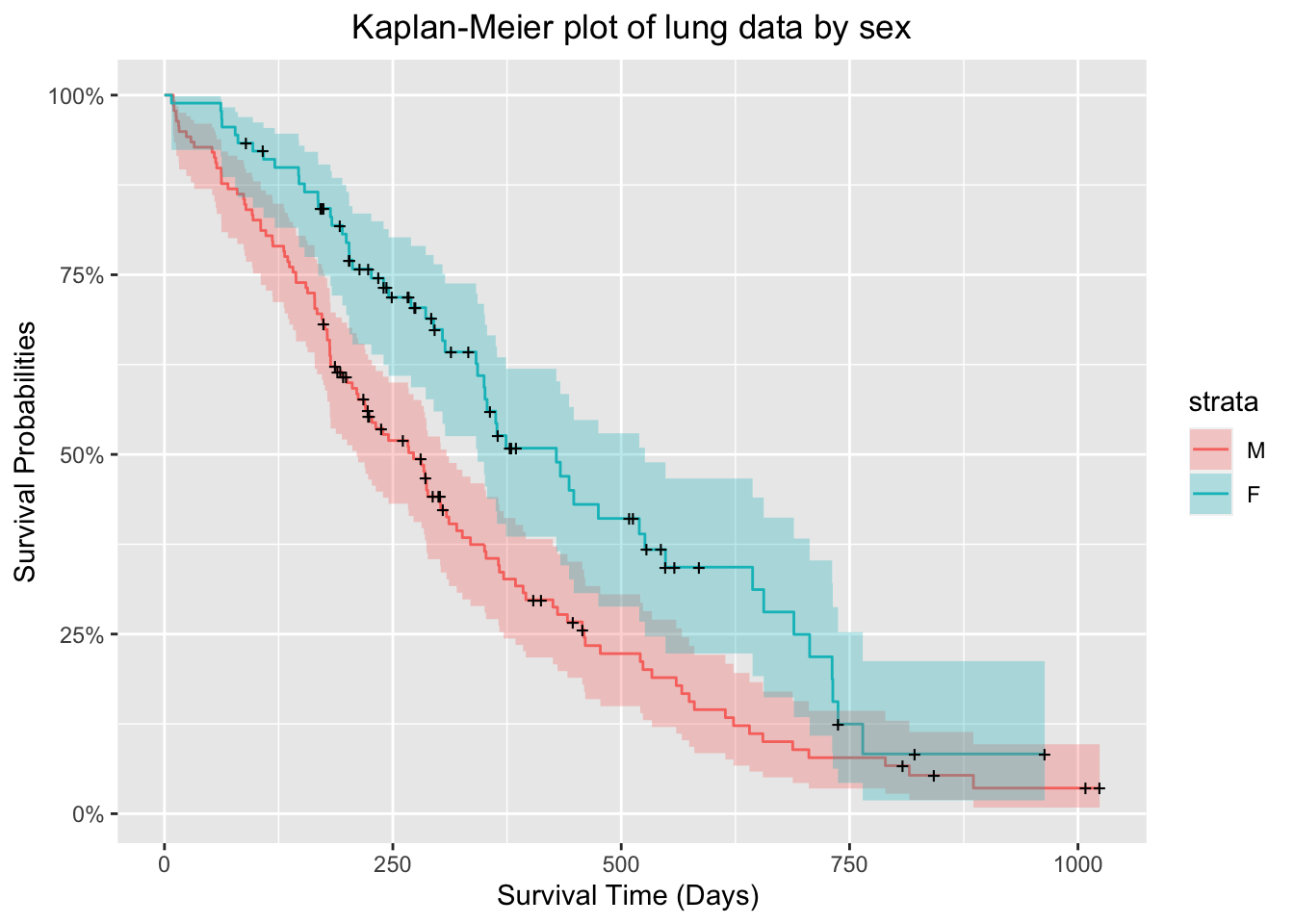 Next, following Carstensen, I fit the baseline Cox model to be used in the model comparisons below.

The hazard ratios for age and sexF are given in the output column labeled exp(coef). As Carstensen points out mortality increases by 1.7% per year of age at diagnosis and that women have 40% lower mortality than men.

Carstensen next shows that this model can be exactly replicated by a particular and somewhat peculiar Poisson model. Doing this requires a shift in how time is conceived. In the Kaplan-Meier estimator and the Cox model, time is part of the response vector. In the counting process formulation, time is a covariate. Time is divided into many small intervals of length h in which an individuals “exit status” , d is recorded. d will be 1 if death occurred or 0 otherwise. The h intervals represent an individual’s risk time. The pair (d, h) are used to calculate an empirical rate for the process which corresponds to the theoretical rate:

The first step in formulating a Poisson model is to set up a data structure that will allow for this more nuanced treatment of time. The function Lexis from the Epi package creates an object of class Lexis, a data frame with columns that will be used to distinguish event time (death or censoring time) from the time intervals in which subjects are at risk for the event. Collectively, these intervals span period from when the first until the last recorded time.

The new variables are:

Next, the time variable is sorted to produce a vector of endpoints for the at risk intervals and a new time-split Lexis data frame is created using the splitMulti() function from the popEpi package.

tfe tracks the time from entry into the study. This is calendar time.

Carstensen then fits a Cox model to both the Lexis data set and the time-split Lexis data set and notes that the results match the original baseline Cox model. This is as one would expect since the three different data frames contain the same information. Nevertheless, it is a pleasant surprise that the coxph() and Surv() functions are flexible enough to assimilate the three different input data formats.

Now, Carstensen executes what would seem to be a very strange modeling maneuver. He turns calender time, tfe into a factor and fits a Cox model with tfe as a covariate.

An important technical point is that the time intervals in equation (*) above do not satisfy the independence assumption for a Poisson regression model. Nevertheless, the standard glm() machinery can be used to fit the model because, as Carstensen demonstrates, the likelihood function for the conditional probabilities is proportional to the partial likelihood function of the Cox model.

Carstensen concludes that this demonstrates that the Cox model is equivalent to a specific Poisson model which has one rate parameter for each time internal, and emphasizes that this is not a new result. He notes that the equivalence was demonstrated some time ago, theoretically by Theodore Holford [10], and in practice, by John Whitehead [14]. Also, in a vignette [15] for the survival package Zhong et al. state that this trick may be used to approximate a Cox model.

Carstensen then demonstrates that more practical Poisson models can be fit by using splines to decrease the number of at risk intervals. The first uses a spline basis with arbitrary knot locations and the second fits a penalized spline gam model.

Carstensen finishes up this portion of his analysis by noting the similarity of the estimates of age and sex effects from the different models.

This demonstration provides some convincing evidence that both parametric and non-parametric models are part of a single underlying theory! When you think about it, this is an astonishing idea. To further explore the counting process theory of survival models, I provide a definition of Aalen’s multiplicative intensity model and a list of references below that I hope you will find helpful.

Finally, there is much more to Carstensen’s note than I have presented. He goes on to provide a fairly complete analysis of the lung data while looking at cumulative rates, survival, practical time splitting, time varying coefficients and more ideas along the way.

Let N = (N1, . . . Nk) be a multivariate counting process which is a collection of univariate counting processes on the interval [0,t] each of which counts events in [0,t]. The Ni may depend on each other. Let σ(Ft) be the sigma algebra which represents the collection of all events that can be determined to have happened by time, t. Let α = α1, . . . α be an unknown, non-negative function and let Y = (Y1, . . . Yk) be a process observable over [0,t].

Then the multiplicative intensity model is defined to be: Λi(t) = αi(t)Yi(t).

This last line certainly looks like the Cox model, and it is not to difficult to confirm that this is indeed the case. You can find the gory details in Fleming and Harrington [9 p 126] or comprehensive monograph by Andersen et al. [5 p481].

I believe that the following references (annotated with a few comments) comprise a reasonable basis from gaining familiarity with the counting process approach to survival modeling.